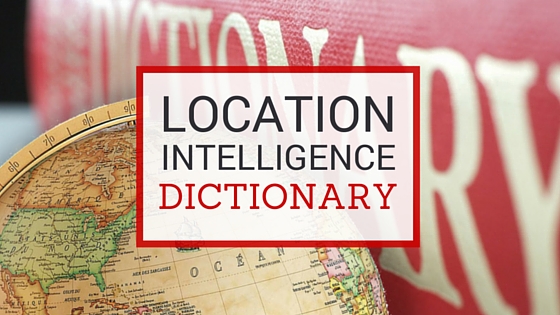 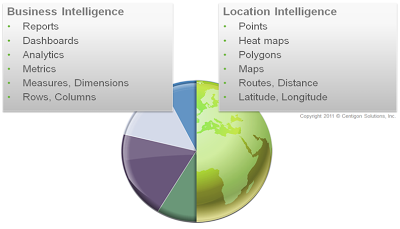 The modern digital map, comes in many different forms and styles from a number of software vendors. Google Maps helped commoditize the geographic map, along with GPS systems prominent in our automobiles.  When you hear the word “basemap” this typically refers to the map for which visualization is drawn on top. Google Maps, ESRI, OpenStreetMaps, HERE (formerly Nokia), and Bing are the most popular base maps used today.

GIS is a system designed to create, store, manipulate, and visually present geographic data. GIS systems usually include a database, middleware, and/or client tools for end to end creation, integration, and analysis of geospatial data.

Individual locations on a map often visually represented as an icon. A point can be referenced in a map using one of multiple references whether it be an address, latitude,longitude, x/y coordinates, or even a city name. The definition and precision of a point can vary based on what mapping technology you are using and how the point is defined.

Is the process of transforming geographic data like addresses, cities, or states into geographic coordinates like latitude/longitude. The benefit of geocoding data is having a machine readable format to quickly query and display.

A heat map is a visual representation of space using color intensity to represent numeric value. A heat map can be represented as points, polygons, or even lines.

Is a data visualization technique that uses the overlapping locations, combined with an algorithm that changes the color intensity and/or hue of the visualization as points overlap and intersect.

A route is a path between two or more locations on a map. Routes can be represented in different ways depending on the travel mechanism. For example, driving, walking, or flying from point A to point B could be drastically different.

Spatial data types allow database administrators to describe data for its intended use in applications that would query this data. For example, latitude/longitude, polygons, and even polylines are spatial data types supported in GIS databases, along with SQL, Oracle and TeraData. Otherwise spatial data stored in a database that does not support spatial or geospatial data types would be stored as traditional database field types like TEXT. The value of spatial data types is the optimization for indexing and serving up this data, specifically when spatial queries are required.

A raster map is a map made up of pixelated images or photographs, and often stitched together . Google Maps and Bing Maps are common raster maps that are built up with tile images. Satellite imagery is an example of raster imagery and the best use case for these map types.

A vector map uses mathematical vectors to draw map imagery rather than photographs. Vector maps require raw data and algorithms to draw and animate graphics on a screen and gain the benefits of resolution independence  Vector graphics are best for drawing organic shapes where less detail is required.

A centroid is the center of a polygon, often used by applications to use a single point of reference for an entire area (polygon).

Is a process for identifying individual points that cross the threshold of a polygon or polyline or that already exist inside or outside of a polygon.

Is the physical space surrounding an individual location. This space is the radius, typically measured in miles or kilometers.

Bounding box is a rectangular space within which points lie. The entire map viewing area could be considered a bounding box, but a bounding box could also be used to select and further restrict a view within the map control.

Is a method to translate location to actual position on earth, which important because the earth is not a perfect sphere. WGS 84 is a global datum used by all GPS vendors and is supported for use with most digital mapping technologies like Google Maps.

A shapefile is a binary file format that stores spatial data in a highly compressed format. It is used to transmit vector data from GIS systems like ESRI and other systems. A shapefile typically requires 3 files (4 if you need to re-project the data for use with tools like Google Maps). The .SHP, .DBF, and SHX are critical files that will travel together and can be edited in GIS tools like ESRI or open source GIS tools like Quantum GIS.
DBF File- A Database file holds all of the meta data that describes each node (point, polygon, line segment, etc) inside of the Shapefile. These DBF files can be opened inside of Excel.
SHX file– The SHX file contains meta data required to combine the DBF and Shapefile together.
PRJ File– The projection file is important if you are unaware of the origination of your shapefile. It identifies what projection (related to geodetic datum) was used and is typically required if you need to change the projection for compatibility with web based mapping tools like Google Maps.

Web Map Service is a protocol for transmitting map imagery (raster map imagery) over the web from a GIS database. This map imagery can range from map tiles to demographic overlays, to weather patterns.

Keyhole Markup Language was acquired by Google and is an XML based definition for transmitting and storing geospatial data and meta data related to points, polygons, polylines, and other geospatial data types. Do you have more terms that should be on the list? Let us know. ]]>